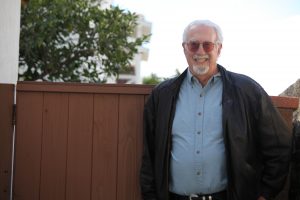 Because of the changes the music business has been undergoing over the past two years, I’ve folded the tent on my work as a career coach/song consultant. However, I still wanted to keep my A&R chops under and oversaw the signing, recording and release of a CD by an incredible singer named Billy Valentine. Billy was a part of the early 1980’s act, the Valentine Brothers and co-wrote a hit for them called “Money’s Too Tight To Mention” that was a Top Twenty Urban radio hit as well as a cover version recorded by Simply Red that was a huge International hit.

The name of the album I did with Billy was called “Brit Eyed Soul,” and it was an idea I had kicking around for many years….to have an American based Urban/R&B singer cover various British acts who had a soulful edge to their sound/material. The album was released on Cleopatra Records in 2018, and I’m very proud of it and urge you to check it out.

On the Parliament/Funkadelic side of this, I was featured in Mike Judge’s animated series Tales From the Tour Bus, and have included many snippets from that show that I’m featured in on the Interviews/Videos page. Please feel free to check that page out to see these snippets as well as longer interviews I’ve done on my years with Parliament Funkadelic.

In the past year I have done a number of projects with guitarist/bandleader Billy Gibbons from ZZ Top. This included A&R work on B.B. King’s recent 80th birthday Duets album, as well as setting up Billy in sessions with Vivian Campbell of Def Leppard and the Les Paul Tribute album. Also, instrumental in getting Billy involved on the recent Dukes of Hazzard score for Warner Pictures.

Lastly, co-authored a book with Billy entitled Rock and Roll Gearhead that was just released. I also have been doing research for Capitol Records on a 50th Anniversary project of the label’s recording studio, and for Time Life I’ve done the A&R on a number of compilation albums for the label.

Completed a re-issue series of the Palo Alto Jazz catalog (McCoy Tyner, Elvin Jones, Phil Woods and numerous others). Also, was instrumental in setting up a joint venture production and distribution deal with keyboardist Brian Auger’s twenty two controlled masters from throughout his career, and a reissue series starting with a career retrospective Auger Rhythms. For Shout Factory I did a seven CD Heroes of the Blues series to correspond with the Martin Scorcese Blues Programs broadcast on PBS.

Produced over seventy reissue projects for the Welk Group of blues, folk, jazz and funk material from the Vanguard catalog. Aside from coming up with package ideas, I also oversaw the marketing on these reissues. Also did catalog projects for Columbia (Karla Bonoff, Phoebe Snow, George Clinton), as well as Capitol/EMI (Leon Huff, George Clinton, Al Green, Teddy Pendergrass, the O’Jays), and was nominated for a 2000 Grammy for my production work on the Sony Box Set Soundtrack For A Century. Worked as co-producer and liner note writer on a ZZ Top Box Set for Rhino

From an A&R perspective, I worked on various projects as an independent A&R consultant. One was for Jane Kelly Williams, an artist I signed while at Mercury. I was also hired by Interscope to work on the Grammy winning Brian Setzer album, The Dirty Boogie, as well as song search for Jonny Lang. I also set up song collaborations for Columbia Records artist Tal Bachman, and acted as Executive Producer on an album by the Manhattan Transfer, Spirit of Saint Louis, produced by Craig Street and released by Atlantic. Have done song research for BMG artists Etta James and Michelle Wright as well as song consultant for Sony Soundtrax on Armageddon, The Faculty, and Runaway Bride. Also, did song research for the advertising firm of Campbell Ewald on a Chevrolet ad campaign.

From 1998 to 2001, was an A&R consultant for Vanguard, and brought a number of artists to the label’s attention including Susan Tedeschi, Shannon Curfman and Patty Larkin. Vanguard successfully completed a deal to sign Larkin.

Duties included all A&R functions for the various acts I signed to the label; Lauren Christy, Grey Eye Glances, and Jane Kelly Williams. On her debut album, Lauren had three Top Ten Adult Contemporary singles, an American Music Award nomination as best new A.C. artist, as well as being nominated for a Golden Globe for the end title song for the film Color of Night. Her second album Breed was released in July, 1997, and the title track was included on the Batman and Robin soundtrack.  Grey Eye Glances was a AAA band based in Philadelphia with their debut album released in February 1997. They toured extensively at Borders bookstores and released their fourth album independently to strong reviews. Jane Kelly Williams is a singer-songwriter based in New York. Her debut album was released in June 1995. Her music was prominently featured in the recent film, Picture Perfect starring Jennifer Aniston. Other signings included the Triplets, Lowen & Navarro, and Jump In the Water.

I was also responsible for finding songs for various Mercury artists including Vanessa Williams and placed the song “Love Is” which was a Number One A.C./Top Ten Pop hit duet with Vanessa and Brian McKnight. Other duties included overseeing all marketing and sales functions for the Parachute logo label, which I was instrumental in reactivating. I was also involved in various reissue projects for Polygram including the James Brown Box Set, three Parliament reissues, as well as a reissue of soul singer Howard Tate. Further label duties included being the Mercury contact with NARAS and the publishing/songwriting community.

Worked primarily as a liaison with Capitol’s artist roster and the publishing community. While there placed approximately eighteen songs with such artists as Heart, Tina Turner, Joe Cocker, Dave Edmunds, the Doobie Brothers and Peabo Bryson.  Oversaw Bryson’s comeback album which yielded a Number One R&B single “Show and Tell” and a Top Ten R&B single “All My Love.” Also worked on an A&R level with Donny Osmond, Bonnie Raitt, and other Capitol artists.

While working Almo’s songwriters and catalog, I was responsible for getting over forty covers – placing songs with Whitney Houston, Taylor Dayne (a Top Five Pop hit “Don’t Rush Me”), Nelson, Michael Bolton, The Whispers, the Everly Brothers and a number of other acts.  Also oversaw the company’s East Memphis Music catalog and was responsible for compiling and releasing a sixty-song compilation that went out to producers, artists, and movie soundtrack coordinators.

1982 to 1984
Worked as a script researcher on a movie based on Otis Redding’s life, and compiled albums on the Isley Brothers and the O’Jays for Epic Records, and a Parliament compilation for Polygram. Also worked as a tape listener for various labels including Polygram and A&M.

Responsible for overseeing a press department of six employees and oversaw press campaigns for a number of artists including The Police, The Go Go’s, Styx, Squeeze, Joe Jackson, The Brothers Johnson, and The Carpenters. Other duties included assigning bios, ticket buys, organizing parties and special events.

In this capacity, placed a number of stories in National Press including Rolling Stone, the New York Times, Newsweek, as well as various rock and R&B publications. Worked as a liaison with five major labels where Clinton had various acts signed, and oversaw artwork, label copy, and marketing.

Graduate of San Francisco State University. Married with one child.